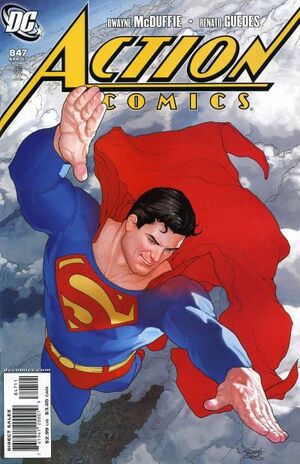 Tell you what I did understand, the thing Clark was going after was the biggest thing I ever saw. Underdog? Our boy wasn't even on the fight card. But somehow, he did it.

Aware of the invasion of the Phantom Zone refugees, Martha Kent feels as if the end of the world is near. Jonathan attempts to comfort her by telling her about a secret adventure he once had with his son.

The previous fall, Clark flew Jonathan to the Fortress of Solitude for the very first time. He created a small space worthy vessel out of Sunstone and the two journeyed together to the stars. Superman took him to the brim of the Kepler Supernova in the constellation of Ophiuchus. While there, he picked up a distress call from a neighboring star system with regards to a Sun-Eater. Superman left Jonathan on his own, and flew off to face the Sun-Eater. He encountered an alien craft armed with an entropy bomb designed to destroy the Sun-Eater. The alien's craft was gravely damaged, so Superman carried the bomb and flew through intense red solar radiation to deliver it into the Sun-Eater. With the threat alleviated, Superman returned to his father and brought him back to Earth.

Jonathan concludes his tale by saying that he had witnessed firsthand Superman succeeding against insurmountable odds. He is confident that this current crisis will pass as well.

Meanwhile, Superman is still trapped within the shattered fragments of the Phantom Zone barrier.

Retrieved from "https://heykidscomics.fandom.com/wiki/Action_Comics_Vol_1_847?oldid=1529210"
Community content is available under CC-BY-SA unless otherwise noted.