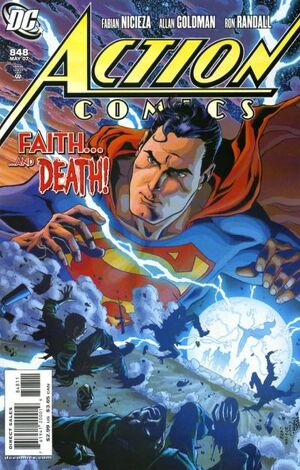 One year ago, Clark tries to get Perry to let him look into a metahuman operating in the country of Nyasir, but Perry says it's too expensive without any proof of this metahuman. Clark's worried about a metahuman becoming involved in religious affairs. One month ago, a group of soldiers in Nyasir threaten a group of missionaries, but the metahuman Redemption moves to protect them. When the soldiers fire on him he responds with an energy blast that obliterates everything around him except the missionaries, killing fourteen soldiers and incinerating thirty-six buildings. Superman arrives on the scene and surveys the damage. Scanning the electromagnetic spectrum, he finds a trail leading back to America and follows it.

Superman arrives in a small town in Colorado. Looking into a cottage, he finds Redemption powered down, kneeling and praying with his parents. He asks for forgiveness for not being able to control the power within him because too many people believed in him. Superman can't tell if he's lying or if he really believes that his powers are faith-based.

As Clark, he goes to visit the local church. He talks with the Reverend about Jarod, Redemption's alter ego. The reverend tells him that Redemption was dispatched to protect the missionaries in Nyasir. Their conversation is interrupted by the townspeople coming in for the service. Clark stays for the sermon before heading home to Lois.

In Nyasir, a group of soldiers take advantage of Redemption's absence and kill the missionaries. When Clark hears the news he heads for the country immediately. He arrives to find Redemption in the process of destroying the city. As he tries to kill a group of soldiers, Superman blocks his fire and tells him that this stops now.

Retrieved from "https://heykidscomics.fandom.com/wiki/Action_Comics_Vol_1_848?oldid=1396569"
Community content is available under CC-BY-SA unless otherwise noted.