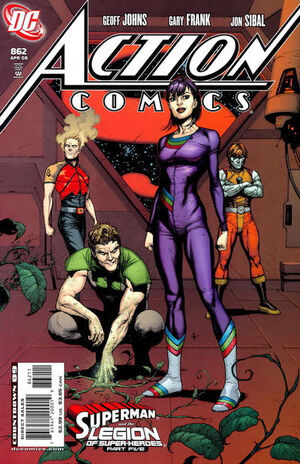 Superman suggests the Legionnaire Subs ought to join the fight, reminiscing his childhood days and how he felt just like the substitutes when he was in Smallville. Brainiac 5 reveals ever since the Justice League drove the Legion underground he's had them at the ready but lacked the confidence to send the subs into such a deadly mission. Brek points out that they literally have nothing to lose while the Legion is on the run to the Human Cultural Center the Subs can even the odds.

Yera and Kirt battle it out, resentment brewing deep within him, Earth Man beats Chameleon Girl to a bloody pulp. His hatred of Superman runs deep. Membership was only ever offered to mild and meek Clark Kent because of who he was supposed to become - not who he truly was.

Eyeful and Tusker are in a classroom delving into the history of the Sunstone crystal tablet and how it records the true human history of Superman. They barely notice the school bus careening towards their window.

The subs, in the hijacked bus have arrived and quickly smash through several rooms.

Introducing the Subs! Rainbow Girl, Fire Lad, Chlorophyll Kid and Stone Boy! Each has a tactical skill that enables them to gain the upper hand very quickly - and just as quickly it turns back.

While distracted the League don't notice the core Legionnaires sneak into the Cultural Center. While they try to free their inanimate friends Brainy finds the Sunstone that started this mess, his tests however reveal something shocking... the crystal is REAL. Someone deliberately orchestrated this from the 21st century!

Collosal Boy also has a revelation for them. The sun had originally turned red due to a solar shuttle accident, or so they thought. Gim reveals a chamber with Dirk, aka Sun Boy suspended in some kind of machine draining and re-channelling his powers!

Worse still they can't remove Dirk without an uncontrolled supernova blast unless they power down the center generators.

Yera crawls from the shadows into the arms of her husband, getting close to her friends in her time of need. Clark is suspicious and removes a cloth masking one of the nullification capsules, only to reveal Yera! Earth Man laughs shifting into his true form and speedily uses Gim's power against him. The path clear he faces off against his true target; Superman!

With the other Legion members entering the fray the battle takes a turn for the better and the subs are quickly back on equal ground with the League. Meanwhile Superman and Earth Man face off for a fight to the finish at the same time as the UPMU arriving in standby to begin the countdown to war.

With one last burst of humanity Superman launched himself at Kirt and smashes him far away from his power sources, directly into space!

Retrieved from "https://heykidscomics.fandom.com/wiki/Action_Comics_Vol_1_862?oldid=1396584"
Community content is available under CC-BY-SA unless otherwise noted.