Part of the 'World Against Superman' event 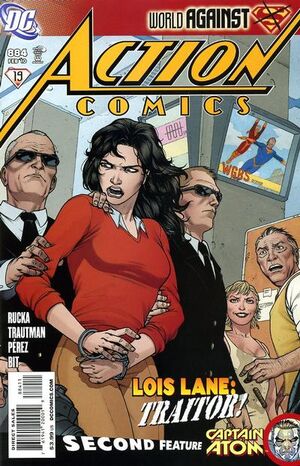 Captain Atom is confuse of Mon-El's appearance and basically wants ("a load of") questions. Mon-El explains he will once Captain Atom follows him. A very weak Major Force grabs Captain Atom's leg and still insists on bringing him into custody. Captain Atom easily, and heavily smacks away Major Force and travels with Mon-El.

Mon-El introduce himself to Captain Atom and explains his substitution for Superman's absence on New Krypton as protector of Metropolis. It is also explained from Mon-El that Natasha Irons had communicated Mon-El to saving Captain Atom and as well in changing the transportation coordinates for Captain Atom's location of "capture" in Metropolis, where Mon-El was able to defeat Major Force and his men.

Mon-El leads Captain Atom to the JLA Watchtower. Once inside, Captain Atom is greeted by his friend Starfire, who explains her membership as a Leaguer to him. The two recounts their association with each other to Mon-El since their service for Lex Luthor when he was President of the United States until his expulsion. While recalling the evils of Major Force, Captain Atom then remembers most of his past from his beginnings as a superhero, his vague visit to another Earth, and his regretful actions as Monarch, which he hopes he would forget his recollection as a mad tyrant. Suddenly, the other members of the Justice League appears and states that they know Captain Atom's heinous acts as Monarch and intends to bring him in.

Retrieved from "https://heykidscomics.fandom.com/wiki/Action_Comics_Vol_1_884?oldid=1712540"
Community content is available under CC-BY-SA unless otherwise noted.