Start a Wiki
Part of the 'Superman: Last Stand of New Krypton' event 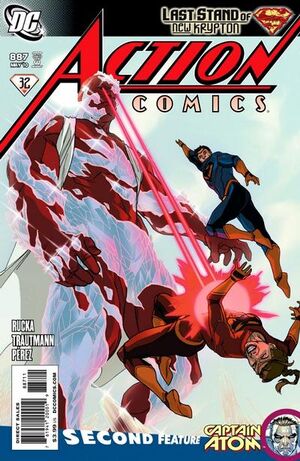 Appearing in "Truth To Power"Edit

Synopsis for "Truth To Power"Edit

Upon arriving in Skartaris, Captain Atom use the advantage of the underground realm to reach Sorcerers' World. There he encounters and fights Mirabai's scouts until being aided by Danel and Aggaro.

That night at the resistance's camp, Captain Atom learns from Danel that eight months had since passed on Sorcerers' World and that the resistance had finally grown into a army, which are now preparing to battle against Mirabai and her forces for tomorrow. Danel hopes that with Captain Atom on their side, they can surely win in which Nathaniel concurs.

Meanwhile at Mirabai's castle, the sorceress is informed by her enslaved servant, a weary Zachary Zatara, about her scouts' battle with Captain Atom. Mirabai, however, is unconcern of Captain Atom posing as a threat to her before she prepares her forces.

Retrieved from "https://heykidscomics.fandom.com/wiki/Action_Comics_Vol_1_887?oldid=1712534"
Community content is available under CC-BY-SA unless otherwise noted.