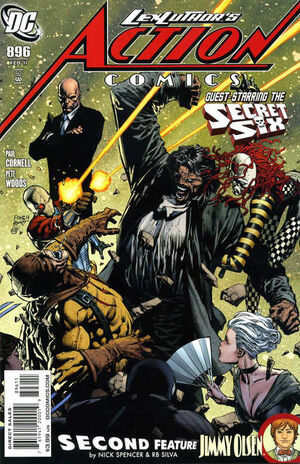 Jimmy has been roped into a charity dating auction. Sebastien made it out of the Secret Six versus Vandal Savage attack (but you won't know how till you spend more money). Jimmy is very unhappy about being involved and even more so when he realizes Chloe is also available to bid upon!

Chloe fetches ten thousand dollars via Mr. Mallory, but nobody is more shocked than Jimmy when he raises a million when a beautiful young woman named Maggie appears as if from nowhere with a case full of cash.

For the first time in a long time Jimmy is not thinking about Chloe, everything is going amazingly well until during dinner at a restaurant, the staff get Jimmy's order wrong. As if by magic the order is corrected and alarm bells begin ringing.

He asks Maggie her last name but she replies it's unpronounceable handing him a business card instead. With one look at the card Jimmy races to the bathroom, locks himself in and tries to escape but in the blink of an eye Jimmy is in a lobby next to Maggie at what looks like... Jimmy's wedding day!

To be continued in Jimmy Olsen #1.

Retrieved from "https://heykidscomics.fandom.com/wiki/Action_Comics_Vol_1_896?oldid=1675653"
Community content is available under CC-BY-SA unless otherwise noted.