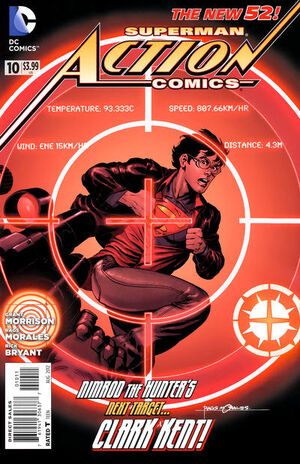 Last winter, Jimmy Olsen had dragged Clark Kent out into the cold and snow to see one of his favourite old sci-fi movies at the Metropolis Theatre. Suddenly, Clark slipped on the ice, and within moments, a van which had lost control on the ice slammed into a telephone pole in front of them. If Clark had not slipped just prior, both he and Jimmy would have been flattened under that van.

Jimmy relates this story over drinks at Swan's Tavern, where newsmen have gathered for years. This time, they have gathered to say goodbye to Clark Kent. Lois Lane remembers how she had first thought of Clark as an insignificant author of human interest puff-pieces, but upon reading his work, she had discovered a certain empathy in his writing that was an extension of who he was.

One day, she and Clark had been having lunch together when a gas main explosion hit nearby, causing significant destruction. While her first instinct was to ask what happened and who was responsible, Clark's first thought was to help people. Seeing that selflessness, she had felt ashamed. They both wound up on the front page that day - after helping the bystanders. To Lois, it wasn't just that Clark was a good person; it was that he made her a better person, too.

George Taylor remembers Clark as a boy, from when he worked at the Smallville Sentinal. He had got to know Clark better when they worked together on the Daily Star. Unable to top Lois' speech, George leads the assembled in a toast to absent friends, and the caring man who made them care too.

Afterwards, they reporters begin to go their separate ways. Walking home together, Lois and Jimmy miss their friend, and hope that he would have liked what was said about him. From a nearby roof, Superman watches them go, and inwardly regrets his decision to kill Clark off.

Retrieved from "https://heykidscomics.fandom.com/wiki/Action_Comics_Vol_2_10?oldid=1660401"
Community content is available under CC-BY-SA unless otherwise noted.