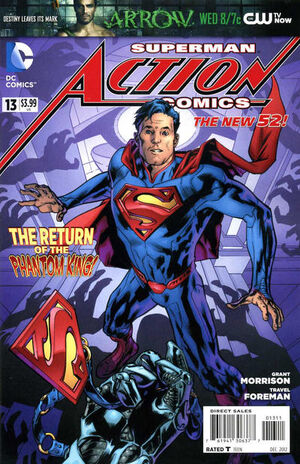 Appearing in "The Ghost in the Fortress of Solitude"Edit

Synopsis for "The Ghost in the Fortress of Solitude"Edit

Synopsis for "A Boy And His Dog"Edit

Long ago on Krypton, Jor-El created a dog for his infant son Kal-El. As soon as they saw each other, the two were inseparable.

Once, though, as Krypton began to collapse, Jor-El and his family watched as someone tried to escape the Phantom Zone. An arm reached through the portal, groping for Jor-El's child, and Krypto leapt up and closed his jaws around the arm, to protect the boy. The dog was then dragged through the portal, and Kal-El watched his best friend disappear.

As a phantom, Krypto followed Kal-El all the way to Earth, as he sped away from the doomed planet Krypton in his rocket. Though Kal-El could not see him, he stood by his charge, even as he stood, much older, at the graves of his adoptive parents. Krypto had followed him next to Metropolis, and fought beside him when he became Superman - though he could do little to help as a phantom.

At night, while Kal-El slept, the dog would watch over him, and the the boy - now a man - would dream good dreams.

Retrieved from "https://heykidscomics.fandom.com/wiki/Action_Comics_Vol_2_13?oldid=1660405"
Community content is available under CC-BY-SA unless otherwise noted.