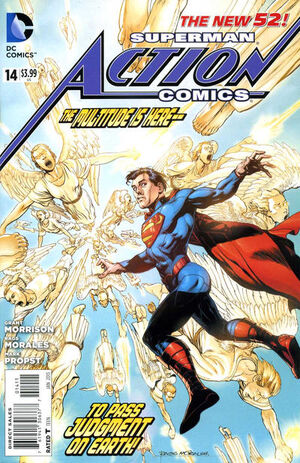 Appearing in "Superman's Mission To Mars"Edit

Synopsis for "Superman's Mission To Mars"Edit

Despite the Justice League's occupation with fighting an alien army armed with extra-dimensional weapons with intent to dominate the world, Superman has somewhere to be. The others urge him to go, knowing it is important to him.

To the surprise and amazement of the scientists at work at the Hayden Planetarium in the American Museum of Natural History, Superman arrives there, as agreed. Eagerly, one of them - Lisa - shows him a set of images they took from NASA's Mars Reconnaissance Orbiter, capturing his arrival on Mars and his fight with the Metaleks. As interested as Superman is, he has come for a different reason. With the arrival of Dr. Neil deGrasse Tyson, things can begin

Through massive coordination of efforts, they have routed data from telescopes all over the world to this planetarium, all in an attempt to help Superman in his effort to find any remaining glimpses of his home planet of Krypton. In this effort, they have already determined that the orbital period they need to best view the star Rao, once Krypton's sun. By combining all of the world's telescopes, the result is essentially one massive telescope - if only any of Earth's supercomputers could process all of that data in the way required. Fortunately, Superman's own brain is such a computer.

Even though Krypton was destroyed, its distance of 27 light years from earth allows them to see that 27-year-old light from earth now; a ghost on the screen. Dr. Tyson explains that Superman, being nearly 27 years old himself, left the planet as a days old baby. As such, their view of Krypton in the present - the light from 27 years ago - has a great significance.

They watch their screens as the planet Krypton is frozen in time at the moment of its destruction. While the planet itself has been gone for years, the story its light tells is that of the night that Krypton died, and as far as Superman is concerned, that night is tonight.

Retrieved from "https://heykidscomics.fandom.com/wiki/Action_Comics_Vol_2_14?oldid=1660406"
Community content is available under CC-BY-SA unless otherwise noted.