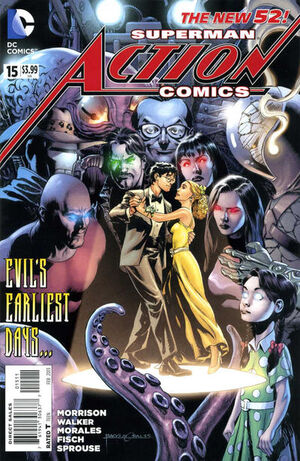 Appearing in "Superman at the End of Days"Edit

Synopsis for "Superman at the End of Days"Edit

Synopsis for "For My Next Trick..."Edit

At the time when Mxyzptlk was entertaining the King-Thing of Zrrrf, he knew that none of the fantastic feats he performed could possibly be his greatest trick of all. He had fallen in love with Princess Nyxlygsptlnz, and despite the many suitors she had had, she chose him because he would treat her like the person she was, and not merely royalty. Even so, having her fall for him couldn't have been his greatest trick.

At the same time, his rival Vyndtkvx had seemed so pompous that Mxyzptlk couldn't resist teasing him now and again - but that teasing led the Vyndtkvx to try to take everything from him. He took the King - though it was an accident. He took the princess, making her run away to another dimension. He took his freedom, trapping him in a tesseract. He took the Superman, thought to be Mxyzptlk's greatest trick, but he was mistaken. Superman was merely his favourite trick.

Some time later, Mxy and Nyxly were reunited on Earth, thanks to her first wish, and they married. They had a child, and named him Ferlin. Compared to all of his other feats, their son was surely his greatest trick.

After he was long gone, though, Nxly hoped that his greatest trick was yet to come; that he would one day escape his Fifth Dimensional trap - and his coma on Earth.

Retrieved from "https://heykidscomics.fandom.com/wiki/Action_Comics_Vol_2_15?oldid=1660407"
Community content is available under CC-BY-SA unless otherwise noted.