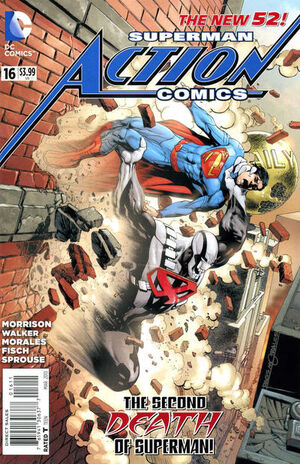 Appearing in "The Second Death of Superman"Edit

Synopsis for "The Second Death of Superman"Edit

Synopsis for "Tales of the Legion of Super-Heroes: Future Tense"Edit

It is one of the first major appearances of President-Elect of Earth Hiroshi Takaneda. As such, tens of thousands of humans have gathered in Brande Plaza to see him, including the Legion of Super-Heroes. Though they are also excited to see the President-Elect, they are there in a different capacity. Saturn Girl has been scanning the massive crowd for any thoughts that might constitute a threat to public safety or the President-Elect himself.

Unexpectedlty, a man from the crowd fires a shot at the President-Elect, saved at the last second by Ultra Boy. Together, Shrinking Violet and Chameleon Boy work to capture and disarm the gunman. When questioned, he claims that he has seen the future, and that in order to prevent a cataclysm, he chose to assassinate Hiroshi Takaneda, who is apparently not what he claims to be.

Though Saturn Girl determines that the man believes what he said, the Legionnaires are skeptical. Regardless, the man has taken extra measures to ensure his success, having infused his body with a powerful explosive. It is only Brainiac 5's quick thinking that contains the blast.

The President-Elect thanks the Legion, promising that from this moment on, everything he achieves will be because of their efforts. After he leaves, Saturn Girl reveals that the assassin came from Naltor, a planet of people with precognitive abilities. However, when she looked into the President-Elect's mind, she saw nothing unusual.

In his car, the President-Elect transforms into Universo, having hypnotized Saturn Girl into missing his true identity. Within 9 years, the United Planets will fall apart under his tyrannic rule.

Retrieved from "https://heykidscomics.fandom.com/wiki/Action_Comics_Vol_2_16?oldid=1660408"
Community content is available under CC-BY-SA unless otherwise noted.