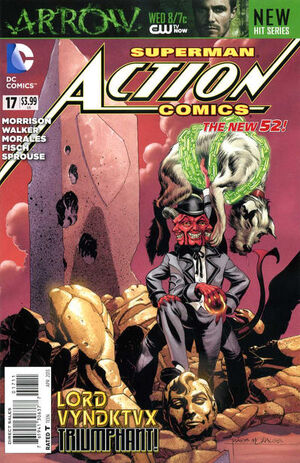 Appearing in "Superman and the Fiend from Dimension 5"Edit

Synopsis for "Superman and the Fiend from Dimension 5"Edit

On the fateful night of Clark Kent's senior prom, he and his father stepped out onto their porch for a talk. Pa Kent could sense that while the future would be full of excitement for his son, it would also be quite scary. Clark admitted that what would be scariest would be being separated from his friends and family, while he is exploring some new place, far away.

Unexpectedly, though, Clark is replaced by his future self, as Superman. Having lost his father several years ago, Clark is surprised to see Jonathan, but assumes that this must be a result of time unfolding and righting itself in the wake of his recent actions. Jonathan is confused, but soon realizes that this is really happening.

Clark is eager to tell his parents all about his life in their future, but Jonathan stops him and asks him two questions: is he happy, and is he still trying to help people? Clark confirms that he is doing both, and Jonathan responds that these are all he needs to know. However, he deduces that given Clark's excitement to tell them all about his life, they must not be around to see it for themselves.

Clark becomes sullen, but Jonathan reminds him that he never thought he'd live forever, reciting his motto that the future is unknowable, and that it must be faced with courage and head held high. Clark admits that that knowledge, amongst other things, has helped him through a lot of problems over the years, and he hugs his father in thanks.

Before the hug is through, Clark returns to his past self, and becomes confused. Brushing off the boy's confusion, Jonathan returns to Clark's fear of the future, and repeats his motto, to Clark's relief. Martha hears them, and insists that she get a photo of her two boys, intending to remember this night for many years to come.

Retrieved from "https://heykidscomics.fandom.com/wiki/Action_Comics_Vol_2_17?oldid=1660409"
Community content is available under CC-BY-SA unless otherwise noted.