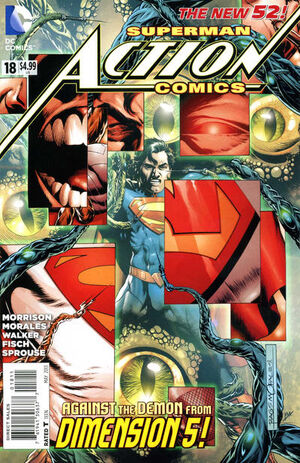 In the 23rd century, a Museum of Terran Heritage has been named for the first boy in space, Noah D. Random, who was a member of the terraforming colony on Mars. There, a young boy with glasses is picked on by a trio of bullies, and when another boy tries to help him, they stare down all of the bystanders into walking away.

Another boy witnesses the attack and sneaks into a closed exhibit, tripping a motion sensor. The exhibit is a monument to Superman's memory, with several audiovisual displays highlighting important moments from throughout the man's career. With amazement, he becomes entranced with all of the things he sees.

Nearby, the other children outside are drawn to the sounds coming from within the exhibit, and become excited by it all as well. When he hears the inspiring words that Superman spoke in his time, the boy returns to the corridor to face the bullies. At first, the bullies are derisive, and intend to beat him up as well, but his determination, and the encouragement of the other children makes them think twice. Gleefully, the children celebrate their victory, and part ways. But this is not the end for them.

Retrieved from "https://heykidscomics.fandom.com/wiki/Action_Comics_Vol_2_18?oldid=1660410"
Community content is available under CC-BY-SA unless otherwise noted.