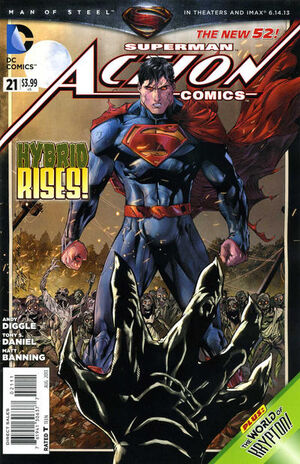 Synopsis for "The World of Krypton, Part 2: Dissension"Edit

After watching her supreme commanding officer assassinate the Minister of Science with her own weapon, Lara Lor-Van is understandably confused and angered. She attacks him, as he attempts to explain that he did it because he could no longer tolerate the Kryptonian Science Council's introspection and weakness. He explains that Krypton will never rise to its former glory while all effort is spent in pursuit of self-satisfaction and scientific navel-gazing. Angrily, Lara prepares to fire her weapon at the colonel, but her lover Jax-Ur aims his own weapon at her, and warns her to stand down. As she relinquishes her weapon to him, confusedly, he whispers that they have to trust the colonel. Despite her obedience, the colonel orders that she be locked up and charged with treason.

Facing the assembly, the colonel claims that it is time for Krypton to put its trust in the strength of a unified military superpower. As Jax-Ur begins guiding Lara away, she realizes that he has been corrupted by the colonel's own corrupt ideology, and knocks the wind out of him, warning that he is dead to her now. Pursued by the colonel's forces, Lara becomes the sole voice of dissent amid a full-scale military coup. Who can she trust now?

Meanwhile, in the underwater ruins of Xan, Jor-El is still late for the Council meeting, and is surprised when what he thinks is an armed escort arrives to collect him. However, he soon learns that they intend to kill him at the colonel's command.

Retrieved from "https://heykidscomics.fandom.com/wiki/Action_Comics_Vol_2_21?oldid=1660413"
Community content is available under CC-BY-SA unless otherwise noted.