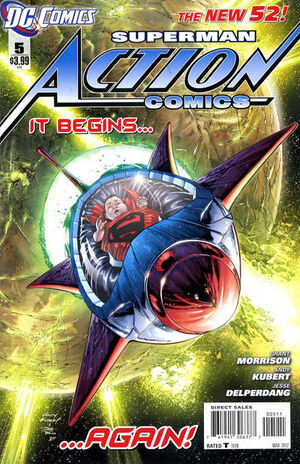 In Smallville, Kansas, Martha Clark and Jonathan Kent are wed to each other. They are eager to start a family together and run their farm.

However, after two years of trying, it becomes clear that the two of them have fertility issues, as Martha has several negative pregnancy tests to prove it. After some deliberation, they decide to see Doctor Hausler. Doctor Hausler sadly reveals that with Jonathan's low motility and Martha's affliction with endometriosis, the likelihood that they will conceive is very low. He advises them that the cost of In vitro fertilization is very high, and as such, they should first try hormonal therapy.

However, after a year of hormone treatment, the pair become frustrated and visit their pastor. He reminds them of the Books of Samuel in which the prophet Samuel was born of Hannah, who struggled with infertility. Meanwhile, Sarah was 90 years old when she and Abraham conceived Isaac. He explains that with people as fine as the Kents, God's plan must mean that while they have no luck right now, something wonderful is in store for them.

Though the Kents saved for years to pay for In vitro fertilization, the end result was miscarriage, and so they decided, finally, to investigate adoption. However, the cost will likely exceed the amount that the failed fertilization cost them. Despite the cost, the Kents agree to save their money again.

On the way home, Jonathan suggests that they mortgage his family farm, despite the risk. Though Martha is apprehensive about the idea, she is ultimately happy that her husband would give up his legacy for her dream of having a child.

Moments later, the truck becomes stuck in a snowbank, and the Kryptonian Rocket crashes into the field nearby.

Retrieved from "https://heykidscomics.fandom.com/wiki/Action_Comics_Vol_2_5?oldid=1660396"
Community content is available under CC-BY-SA unless otherwise noted.