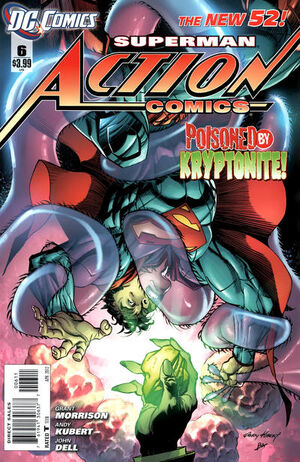 Appearing in "When Superman Learned to Fly"Edit

Synopsis for "When Superman Learned to Fly"Edit

After the death of his parents, Clark Kent gives up the farm to his neighbour, Mr. Fry. The Frys' own farm has been foreclosed upon, and Clark feels it is the least he can do to help a friend. Still, the place has a lot of memories.

His parents had never been ashamed of his abilities, and though he had to keep them secret, his parents encouraged him to use them to stand up for those who couldn't stand up for themselves.

Later, when he told his friend Pete Ross about his intention to become a reporter, Pete was surprised. Clark's apparent obsession with astronomy seemed to indicate a future in that field to him. Pete on the other hand, joked that he might like to use his super-human powers to secretly fight injustice. It was just a joke, but the idea resonated with Clark.

Lana Lang felt that Clark had too much to offer to simply stay in Smallville. The important thing to her, though, was that no matter where Clark went, if he ever came back to Smallville for a visit, he would always have family there in her.

On that last day in the Kent house, Lana and Pete are there with Clark to help see him off at the train station. While his friends pack the car, Clark takes a moment to look over all of the family photos on the wall. Finally Clark accepts that he is on the path to doing what his parents always hoped for in him, and he joins his friends outside.

Retrieved from "https://heykidscomics.fandom.com/wiki/Action_Comics_Vol_2_6?oldid=1660397"
Community content is available under CC-BY-SA unless otherwise noted.