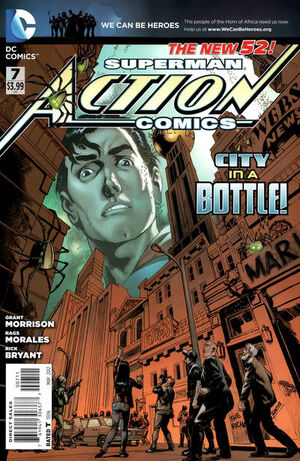 In Metropolis after Superman has taken off in search of the abducted portion of the city, John Henry Irons struggles to hold up the dangling end of the Hob's River suspension bridge until everyone has been evacuated.

Eventually, he cannot hold the bridge any longer, and he has to let go. The end of the bridge collapses, and he realizes that sooner or later, he'd better get a helmet, as he dodges the debris. Passing over what remains of the bridge, John realizes that there are a lot of people trying to get onto the bridge in order to get to family in New Troy. This reminds him to call his niece Natasha, and let her know he's okay.

With the island gone, the banks of Hob's River are crumbling, and the waters are rushing in to fill in the hole - and taking a ferry full of people with them. Using his knowledge of physics, John manages to redirect the course of the ferry toward shore, preventing it from falling into the chasm below.

The rest of John's day is a blur of rescues and crime-stopping. With all the work he does, he starts to wonder if this good feeling must be the same way that Superman feels when he's on the job. He realizes, eventually, that everywhere he goes, the people of metropolis are coming together to meet the crisis. He supposes that it doesn't just take one man like he or Superman to bring Metropolis through a disaster - it takes millions of them.

Retrieved from "https://heykidscomics.fandom.com/wiki/Action_Comics_Vol_2_7?oldid=1660398"
Community content is available under CC-BY-SA unless otherwise noted.