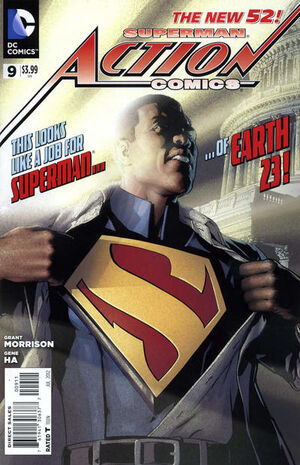 Appearing in "The Curse of Superman"Edit

Synopsis for "The Curse of Superman"Edit

At the White House, a meeting is in progress. Qurac - a Middle Eastern rogue nation - is on the bring of developing nuclear weapons, and the US Government needs to decide what to do next. It is hoped that over the course of his talks with the Quraci President, US President Calvin Ellis will be able to come to an agreement that would halt weapons development.

President-for-Life Harrat is expecting to be amused by Ellis' call, but he is soon confused by Ellis' intent to update him on the status of his own nuclear program. As it happens, Calvin is on a blue-tooth device, and - as Superman - has rendered all five of Harrat's underground Firestorm Labs non-functional. Two have caved in, one is filled with lava, one has suffered a core-breach, and the other simply doesn't work anymore.

Harrat declares the attack on his labs an act of war, but Ellis points out that having denied the existence of the plants, Harrat cannot openly admit that they were destroyed. He also points out that in the event of a war, Ellis' Alliance of Nations - which includes Atlantis, Markovia and Themyscira - certainly assure a regime-change in Qurac. Ellis offers peace and a place in the Alliance, whose medical technology and free trade would be of benefit to Harrat's people.

Hanging up from his phone call, Superman gets back to work at the fifth plant. Wonder Woman marvels at the contradiction: Calvin Ellis, a man of integrity, is secretly Superman, also a man of integrity, but is hiding this fact from everyone else and using his gifts to bend international law and cross borders at will. Superman argues that his actions, though shocking, are ultimately good. Wonder Woman points out that one day, even if his intentions are good, not everyone will necessarily agree.

Retrieved from "https://heykidscomics.fandom.com/wiki/Action_Comics_Vol_2_9?oldid=1660400"
Community content is available under CC-BY-SA unless otherwise noted.