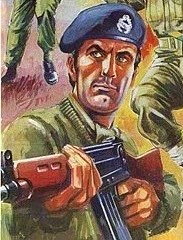 Action Man (whose real name has never been officially revealed) is a British soldier, effectively the ultimate fighting man. An expert in virtually every form of combat as well as intelligence gathering, sabotage, air and sea rescue and just generally being pretty damned heroic, he is both an accomplished solo operative and the leader of the Action Man Team (also sometimes known as the Adventure Team). He has been operating throughout the world for decades, but never seems to get any older, and has at one time or another seemingly served in almost every branch of the armed forces, leading to speculation that there have actually been several virtually identical operatives using the same code name, though Action Man's basic personality seems to have remained the same throughout; calm, unflappable, fiercely moral and courageous. He and his comrades (including the Atomic Man, Tom Stone, the superheroic Bulletman and Action Man's longest serving ally The Talking Commander) have protected the world from everything from Nazis to aliens such as the Intruder, the space pirate Captain Zargon and, more recently, Dr. X and his Council of Doom (though this last menace faced what seemed to be a different or rejuvenated Action Man-for more on whom, see Action Man (Modern)-after the original had apparently been missing in action for several years).

None; he's just very good at his job!

You name it, he's got it! (But in particular, Eagle Eyes and very strongly gripping hands)

Scorpion Tank; various other modes of transport according to mission specifics.

Too Many to Mention.

While there appear to be more than one Action Man, all of them have an identical scar on their right cheek (except the cyborg Atomic Man, who has the same scar on his left cheek). Possibly, this is inflicted as some sort of initiation ritual when joining the unit (we won't mention the apparently welded on underpants)?

Retrieved from "https://heykidscomics.fandom.com/wiki/Action_Man_(Classic)?oldid=688967"
Community content is available under CC-BY-SA unless otherwise noted.