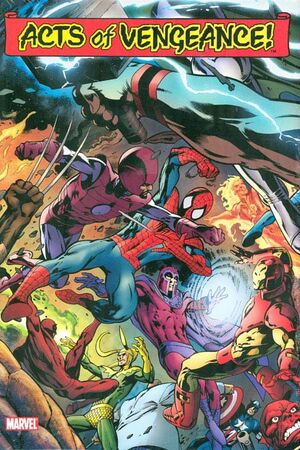 Appearing in "Acts of Vengeance!"Edit

Synopsis for "Acts of Vengeance!"Edit

A disguised Loki gathers a group of super-villains he calls the Prime Movers to join forces and destroy the Avengers---whom Loki had actually inadvertently created back in the day---and to strike out at his arch-rival Thor. Dr Doom, Kingpin, Magneto, Mandarin, Red Skull and the Wizard agree, while Apocalypse (in the pages of X-Factor #50), Cobra, Mad Thinker and Namor decline the offer. As part of his plan, Loki engineers a prison break at the Vault. The main thrust of the issues involved in this line-wide event is that heroes face off against unfamiliar enemies, for example, Mandarin appears in the X-Men issues, and Rusty and Skids of the New Mutants battle the Vulture.

The assembled villains fail to operate in a cohesive way, thwarting their plans to kill their enemies. Loki ends up imprisoning the Kingpin, Mandarin and Wizard in frustration, when the Wizard accidentally reveals the location of their secret meeting place on the Isle of Silence. The Avengers track Loki down and Thor banishes him back to Asgard. Doctor Doom backs out of the arrangement and pursues his own scheme to defeat the Fantastic Four, as his own self-importance means he can't allow anyone else to defeat them. While the Fantastic Four are called to Congress to testify on the proposed Superhuman Registration Act, he sends a random assortment of villains to attack them.

Retrieved from "https://heykidscomics.fandom.com/wiki/Acts_of_Vengeance_Omnibus_Vol_1_1?oldid=1501553"
Community content is available under CC-BY-SA unless otherwise noted.