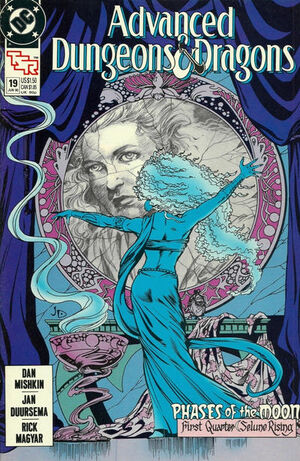 What in the name of the all-fired abyss are you jokers talking about?

Appearing in "Phases of the Moon: First Quarter: Selune Rising"Edit

Synopsis for "Phases of the Moon: First Quarter: Selune Rising"Edit

Onyx bumps into a man on the streets of Waterdeep in the evening. The man claims someone is calling him and wanders into the night along with everyone else in the streets. Onyx looks to where the other are gathering and sees the goddess Selune. He goes to Luna's inn and tells the assembled adventurers of his group that he has seen Selune in the street. Onyx is told that is impossible, because Luna is really the goddess Selune. Luna decides to confront the false goddess. Luna and the goddess battle with magic and Luna is captured.

Retrieved from "https://heykidscomics.fandom.com/wiki/Advanced_Dungeons_and_Dragons_Vol_1_19?oldid=1394092"
Community content is available under CC-BY-SA unless otherwise noted.