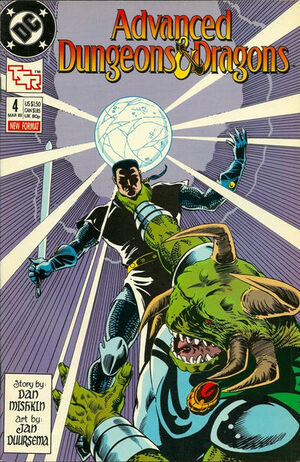 Better not order dessert just yet, fang-face! 'Cause it just so happens this hunk of dwarf flesh likes to bite back!

Just outside the citadel of sorcerer Imgig Zu, centaur Timoth Eyesbright rushes through an avalanche to save his compatriot, Onyx the dwarven thief. Vajra is hit by debris, and paladin Agrivar rushes to her aid. Meanwhile, deeper in the bowels of a cavern beneath the citadel, Imgig Zu prepares for a special rite to liberate his people from within the gem of the goddess Selune. Agrivar heals Vajra and the four comrades head into the cave, slaying the ogres who oppose them. Eyesbright sees flowers and the group decides to follow them, because flowers should not be growing underground. Just as Imgig Zu opens the gateway to free his people, the group of adventurers arrive to free Cybriana. Agrivar kills Imgig Zu and Cybriana is absorbed into the gem. After a flash of light from the gem, Cybriana re-emerges with the gem, changed. She explains that she has merged with Kilili and they can now call her Kyriani. The adventurers return to Luna's inn and give her the gem.

Retrieved from "https://heykidscomics.fandom.com/wiki/Advanced_Dungeons_and_Dragons_Vol_1_4?oldid=1394077"
Community content is available under CC-BY-SA unless otherwise noted.