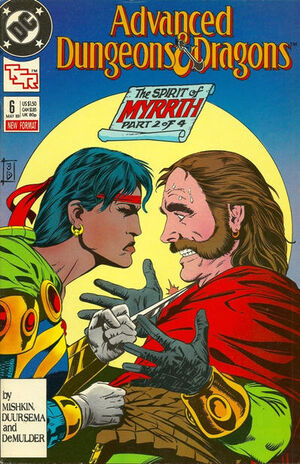 Luna and Conner are in Luna's tavern and inn, discussing the adventurers' being away in the City of the Dead, when two members of the Watch burst in, demanding to know about the graverobbers they caught the previous night. Conner sees one of the men use magic, something the Watch never does, decides they are not truly Watch members and attacks them. The men transform into Wererats, revealing their true identities. With the assistance of tavern cats, Conner backs the wererats against a wall and they are about to tell him who sent them, when they are suddenly disintegrated.

In the meantime, Vajra, Onyx and Kyriani have found a cave entrance. Onyx wanders in and nearly falls into inky blackness. Meanwhile, Conner has gone to the City of the Dead, to look for Vajra, Onyx and Kyriani. Inside, the adventurers determine that they have to find their way back to Waterdeep. It is then the Conner arrives and Vajra, having an old score to settle, attacks him. Conner quickly says that he knows the way back to Waterdeep, staying Vajra's hand. Conner tells the group that he left a trail of copper pieces from the entrance. All they have to do to leave is follow the copper pieces back to the exit. A rust monster appears and begins eating the copper pieces. The group rushes to follow the trail before the rust monster eats all the copper. They succesfully reach the exit only to be confronted and captured by jesters. When they awake, they find themselves captives of the Jesters Guild. The jesters raise the dead jester Myrrth.

Retrieved from "https://heykidscomics.fandom.com/wiki/Advanced_Dungeons_and_Dragons_Vol_1_6?oldid=1394079"
Community content is available under CC-BY-SA unless otherwise noted.