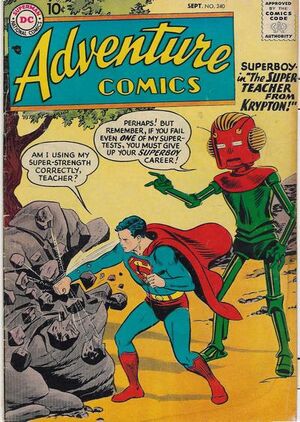 If you sail the seven seas!
In gondola or catamaran!
And you find yourself in trouble!
Please call on Aquaman!

A robot teacher programmed by Jor-El to teach Kal-El survives the explosion of Krypton, comes to Earth, and puts Superboy through a series of super-power examinations. Superboy gets no feedback from the machine until he is finished as it informs him he has failed and must give up being Superboy. Superboy is crestfallen, but agrees to abide by the decision the machine has rendered, upon which the teacher congratulates him and tells him he just passed the final test to see if he would willingly refrain from exercising his power. Superboy has passed all the tests with flying colors.

Appearing in "Arrows -- for Hire"Edit

Synopsis for "Arrows -- for Hire"Edit

When money problems force Oliver Queen and Roy Harper to raise $2,000 in two days or lose their house, they advertise to do odd jobs for a fee as Green Arrow and Speedy. Beforehand, however, Green Arrow fires tiny arrows into the doorways of everyplace in Star City that might be hit by crooks. The arrows contain tiny microphones which relay back sounds to a special earplug he wears, thus alerting him to any attempted crimes while he and Speedy are working. The two archers earn the $2,000 in time, and stop a jewelry store holdup as well.

Appearing in "The Alphabet Book of the Sea"Edit

Synopsis for "The Alphabet Book of the Sea"Edit

Aquaman rescues J. Oswald Sinker, a children’s book writer who lives on Christmas Island, and thus gets himself entangled in helping Sinker write a rhyming alphabet book based on the sea. The book starts out with “A is for Aquaman”, and the sea king helps him find other things to use for letters: Blackbeard’s treasure, Catfish, Dogfish, Electric eels, Flying fish, Guppies, the Island of Atlantis, Kissing fish, Latimeria, Manta ray, Needle fish, Oyster, Porpoise, Starfish, Tuscarora Trench, Viperfish, and Walking fish. But Sinker is stumped for an entry for X until Aquaman realizes that X is for Xmas Island.

Retrieved from "https://heykidscomics.fandom.com/wiki/Adventure_Comics_Vol_1_240?oldid=1498317"
Community content is available under CC-BY-SA unless otherwise noted.