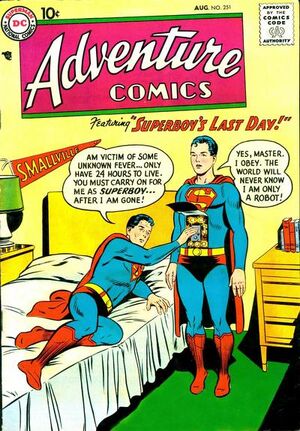 While helping his foster parents with spring cleaning, Clark Kent remembers how his first Superboy robot, nicknamed “Friday”, helped save his life when Superboy had his first encounter with Kryptonite and didn’t know the nature of the green meteor which was killing him.

Appearing in "A Case of the Super Arrows"Edit

Synopsis for "A Case of the Super Arrows"Edit

In the distant future of 3000 A.D., Green Arrow and Speedy are hailed as great heroes from the past, and as such some people from the future send a token of appreciation into the past for the two heroes.

Appearing in "A World Without Water"Edit

Synopsis for "A World Without Water"Edit

Aquaman is thrown into the year 6958 A.D. by an accidental atomic explosion. There he is revived by Zed-3, a scientist, who informs them they have done limited time travel experiments, but that almost all water on Earth evaporated in a nova eruption 1000 years ago. The sea creatures adapted to life on land, and Earthmen invented pills to replace moisture content, which sustain Aquaman. Just as Zed-3 is about to send Aquaman back to 1958 with a time machine, criminal scientist Dr. Varn breaks in and attempts to hijack the device. Aquaman commands the land-dwelling whales, manta ray, octopi, and flying fish to defeat Varn and his gang. Then Aquaman is sent back to his normal era.

Retrieved from "https://heykidscomics.fandom.com/wiki/Adventure_Comics_Vol_1_251?oldid=1529119"
Community content is available under CC-BY-SA unless otherwise noted.