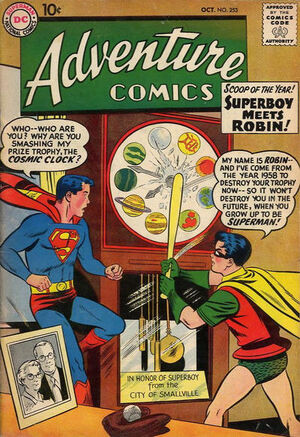 You can't fool me, Robin! You're in with that gang - and your scientist boss used some super-scientific gimmick to materialize you in my Secret Citadel! You're here to spy on me!

Superman is inside his Fortress of Solitude when a Kryptonite bomb hidden within an old trophy explodes. He stumbles out of the cave where he finds Robin, the Boy Wonder. He explains that the bomb was concealed inside of a clock-trophy he once received at a science fair exhibit as Superboy. Superman is fading fast, and it won't be long until he dies.

Robin goes to see Professor Carter Nichols, who uses his Time-Ray to send him backwards in time. He arrives in Smallville and introduces himself to Superboy. He warns him of the hidden bomb and the two begin investigating all potential suspects. They concentrate theie efforts on three aging scientists, all of whom are donating materials to the Smallville Science Fair.

Over the next few days, Robin spends time at the Kent home and the family general store. Superboy and he go on patrol together and encounter several thugs using highly advanced equipment to pull off daring robberies. They know that the criminals aren't intelligent enough to develop these super-weapons on their own, and they ultimately trace their construction back to Lex Luthor. They seize Luthor in the midst of a bank robbery and take him to prison.

Later, they attend the Smallville Science Fair, where Superboy receives a number of gifts including a suspicious-looking clock. Robin and he spring into action in an effort to destroy the item, but a man named Pete Groff is hiding inside of a prop robot with a deadly piece of Kryptonite. He knocks Robin down with a robotic arm, and uses the Kryptonite to weaken Superboy. Groff exits the clock and attempts to get away, but Superboy crawls over to Robin and opens his utility belt. He removes a miniature microscope and uses the lens to reflect the sun, temporarily blinding Groff. Groff runs into a telephone pole and knocks himself senseless. Once the Kryptonite is out of harms way, the two heroes revive and take Groff to prison.

Appearing in "Prisoners of Dimension Zero!"Edit

Synopsis for "Prisoners of Dimension Zero!"Edit

Green Arrow and Speedy stare into the maw of the dimensional portal, only to find oversized arrows flying towards them from within. They tie themselves to a length of cable, and travel through the portal only to arrive in Dimension Zero. They discover that two giant-sized children are the ones repsonsible for slinging the arrows through the warp.

Green Arrow and Speedy leave the scene and explore more of this strange new world. They eventually encounter an alien who calls himself Xeen Arrow. Like Ollie, Xeen Arrow professes to be a heroic adventurer, and even maintains his own Arrowcave. The three bowmen team-up to stop a group of alien criminals. Afterwards, Xeen leads them back towards the dimensional rift and helps them to return home.

Aquaman discovers a dimensional portal, and travels through it, arriving one million years in Earth's past. He encounters a friendly cave man, as well as a few dinosaurs. The animals of this era prove too primal for his telepathic abilities to have any effect over, so he hastily avoids their attacks until he can get back towards the dimensional rift. Aquaman arrives back in his proper time period, and discovers that the cave man he encountered had created a cave painting depicting Aquaman's adventures in 1,000,000 BC.

Retrieved from "https://heykidscomics.fandom.com/wiki/Adventure_Comics_Vol_1_253?oldid=1529121"
Community content is available under CC-BY-SA unless otherwise noted.