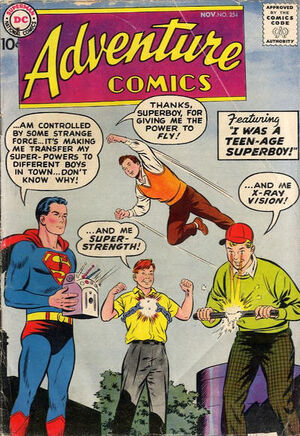 Appearing in "I Was a Teen-Age Superboy"Edit

Synopsis for "I Was a Teen-Age Superboy"Edit

In order to conceal his secret identity when Clark Kent is struck by a starter’s bullet (which bounces off), Superboy pretends that Krypto has hypnotized him into giving his powers temporarily to Clark and several other people, including Lana Lang.

Appearing in "The Menace of the Electric Man"Edit

Synopsis for "The Menace of the Electric Man"Edit

Roy Pinto, an escaped convict, poses as “Roy Peters”, an aquarium owner who specializes in electric eels. He discovers that his handling of the eels has made him impervious to electric shock, and that he can conduct and direct electric shocks through his body from outside sources. He uses the ability for crime, as the Electric Man, and, for a time, Aquaman is stumped as to how to capture him. Finally, he has his octopi plunge their tentacles into a ship’s cargo of liquid rubber, and they are able to nab the villain.

While on vacation, Oliver Queen and Roy Harper hear that Professor Hagen has been lost in the area during a storm. Changing into Green Arrow and Speedy, the two heroes go looking for the professor and find him but they are attacked by a lost tribe of Indians who damage the Arrowplane.

Taken to the Indian's tribe, Green Arrow is the subject of scorn from the tribes medicine man Big Turtle, who decides to make up a phony legend to discredit the hero. When Big Turtle tells Green Arrow of a legend of a great archer who can fire an arrow at the full moon and cause a storm. However, when Green Arrow is able to create this "legend" the tribes people turn on Big Turtle and Green Arrow is allowed to repair the Arrowplane, and he, Speedy the Professor and his aides leave the area.

Retrieved from "https://heykidscomics.fandom.com/wiki/Adventure_Comics_Vol_1_254?oldid=1551979"
Community content is available under CC-BY-SA unless otherwise noted.