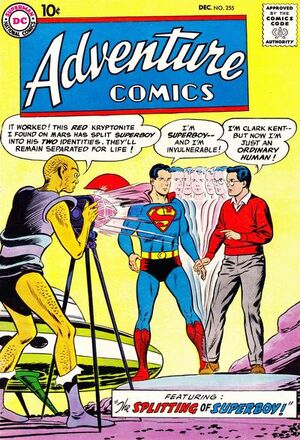 Appearing in "The Splitting of Superboy"Edit

Synopsis for "The Splitting of Superboy"Edit

A Martian splits Superboy into two beings with a chunk of Red Kryptonite. One of the resultant boys is an evil, non-powered Clark Kent with amnesia, who makes trouble for Superboy until he dies in an explosion while trying to destroy Superboy.

Appearing in "The War That Never Ended"Edit

Synopsis for "The War That Never Ended"Edit

En route to a crime convention in Tokyo, Green Arrow and Speedy's airplane crashes in the pacific and they wash up on an island where a forgotten battalion of Japanese soldiers who still believe World War 2 is being fought are located. Learning that their radio equipment was ruined during a typhoon in 1945, and that they refuse to believe the war is over, the soldiers attack Green Arrow and Speedy. However, Green Arrow is able to best them with his various trick arrows. Signaling a nearby naval ship to come to the island, the commander of the battalion surrenders to Green Arrow.

Faced with choices as to which aquatic emergencies to respond, Aquaman finds that in each case, an unknown person handled the jobs he couldn’t do...and left three holes in each area.

Retrieved from "https://heykidscomics.fandom.com/wiki/Adventure_Comics_Vol_1_255?oldid=1529116"
Community content is available under CC-BY-SA unless otherwise noted.