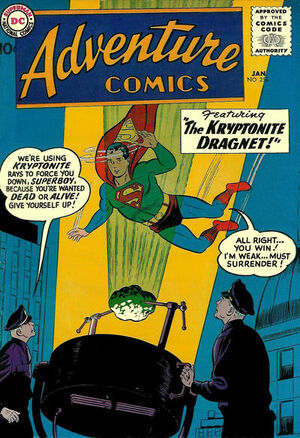 Appearing in "The Kryptonite Dragnet!"Edit

Synopsis for "The Kryptonite Dragnet!"Edit

Appearing in "The Ordeal of Aquaman"Edit

Synopsis for "The Ordeal of Aquaman"Edit

Aquaman is captured by a gang of crooks and stranded in the desert to die.

When an expedition of Starfish Island is reported to begin, Oliver Queen is concerned that it will lead to the revelation that he is the Green Arrow. Oliver explains to Speedy that Starfish Island was where the Green Arrow was born, explaining that one night years ago he fell overboard a ship and swam to the island. There he was stranded and in order to survive he crafted a makeshift bow and arrow and began writing a diary on a cave wall of his time on the island.

When he spotted ship hijackers, he created a makeshift Robin Hood costume and foiled the plot. He was rescued, and when asked who he was, he told the captain that he is the Green Arrow. With his story finished, the two arrive on Starfish Island and deter an explorer of the island by setting off their Geiger counters and making them think the cave where the Green Arrow's old diary is located is radioactive. After the expedition leaves, Green Arrow and Speedy destroy the diary to insure that no one learn his secret identity.

Retrieved from "https://heykidscomics.fandom.com/wiki/Adventure_Comics_Vol_1_256?oldid=1398704"
Community content is available under CC-BY-SA unless otherwise noted.