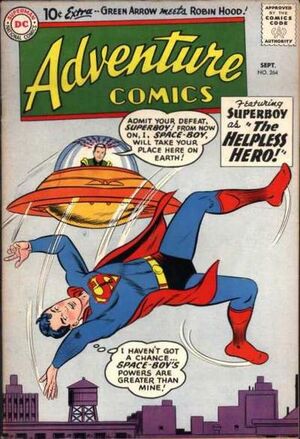 Appearing in "The Helpless Hero"Edit

Synopsis for "The Helpless Hero"Edit

Rather than become a meteor-watcher like his father, alien youth Zall-Dix comes to Earth, distorting Superboy's powers in hopes of blackmailing him into exchanging bodies via mental-transfer ray.

Appearing in "Aquaman and His Sea Police"Edit

Synopsis for "Aquaman and His Sea Police"Edit

Asked to visit the city of New Venice (a city who's streets have been flooded due to a sea-quake and have adopted a "Venice" lifestyle) by it's mayor. Upon arriving, Aquaman quickly notices that the town has been effected by a wave of lawlessness. Asking for Aquaman's assistance, the mayor makes him the sheriff of the town. Aquaman goes about the city stopping people from committing crimes with the help of his undersea friends. After a new sea-quake opens a crack in the ocean floor the water in New Venice begins to drain out of the streets. Aquaman and his friends then plug up the hole to keep the streets of New Venice flooded with water. At the celebration ceremony, Aquaman returns his badge to the mayor stating that his job was done.

While visiting the Robin Hood Museum in England, Oliver Queen gets separated from Roy Harper when he enters a cave where atomic devices were once tested. When one of the devices goes off, Oliver finds himself transported back to the time of Robin Hood and his Merrie Men. Finding an injured Robin Hood in the cave, Oliver agrees to pose as the legendary hero and save Maid Marian from King John.

Disguising himself as Robin Hood, Oliver travels to King John's castle, fights his way through his guards and saves Maid Marrian and returns her to Sherwood Forest. Returning to the cave Oliver bids farewell to Robin Hood and is transported back to the present. Returning to the tour, Roy points out to Oliver that Robin Hood also used trick arrows, which leaves Oliver to wonder if the whole experience really did happen or if it was a dream.

Retrieved from "https://heykidscomics.fandom.com/wiki/Adventure_Comics_Vol_1_264?oldid=1398711"
Community content is available under CC-BY-SA unless otherwise noted.