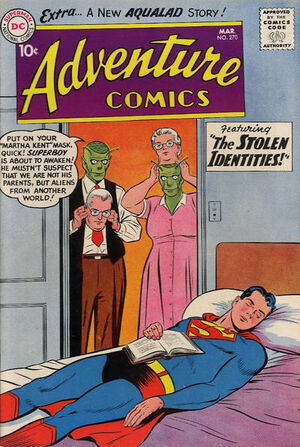 Not a ghost, Janu! Just Congorilla... The ninth wonder of the world!

Appearing in "The Stolen Identities!"Edit

Synopsis for "The Stolen Identities!"Edit

Jonathan Kent and Martha Kent are abducted to the sub-atomic world of Xelthu, and two Xelthuians impersonate them, but cannot deceive Superboy for long. Even though their attempt to use a Red Kryptonite ray to transfer him to their world goes awry, he is able to save their tiny world and regain his parents.

Appearing in "The Ninth Wonder!"Edit

Synopsis for "The Ninth Wonder!"Edit

Synopsis for "The Menace of Aqualad!"Edit

Bringing a pod of whales to the mainland, Aquaman and Aqualad are stopped by a ships captain, who gives Aquaman a cake because that Sunday is Aquaman's birthday. Aquaman and Aqualad then drop off the whales at a local marine exhibit for a benefit of retired seamen, there Aquaman puts on a show for spectators.

After the exhibit, Aquaman is about to return to the sea when an old woman falls into the water, Aquaman saves her life and she reveals that she is a fortune teller and that she will reward Aquaman with a free fortune telling. In her tent she tells Aquaman that there will be a great danger that somebody new in his life may replace him.

Later that night, back at sea, Aquaman is woken by his pet octopus Topo, who alerts him that a ship is sinking. Aquaman and Aqualad go to the rescue however Aqualad is knocked on the head by the sinking mast-head of the ship. Soon after, Aqualad begins acting strange, collecting items and asking questions about Aquaman's weaknesses.

During a break up of some pirates stealing rare fish, Aqualad doesn't participate in the fight because he is too busy collecting a fish bowl and harpoon gun. That night, when Aquaman falls asleep, Aqualad ties him up in a net and leaves him alone. When Aquaman awakes he has to fight a sword fish all alone. Finding the boy he demands answers, and Aqualad takes him back to their undersea cave home and shows him that he was really constructing a trophy collection as a birthday gift.

Retrieved from "https://heykidscomics.fandom.com/wiki/Adventure_Comics_Vol_1_270?oldid=1550399"
Community content is available under CC-BY-SA unless otherwise noted.