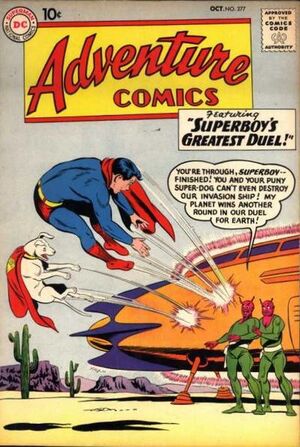 Appearing in "The Duel for Earth"Edit

Synopsis for "The Duel for Earth"Edit

To stave off an alien invasion, Superboy engages in a duel with three representatives of their race.

Appearing in "The Underwater Olympics"Edit

Synopsis for "The Underwater Olympics"Edit

Aquaman and Aqualad stage an “underwater Olympics”, commanding two separate teams of sea-creatures which compete against each other in selected events. The contest seems even, with conscienceless “salvage” expert Bart Horval spying on the events in hoping of finding something from which he can profit. In the last event, Aquaman deliberately makes a detour around a bed of seaweed instead of going through it, thus keeping himself from racking up enough points to unseat Aqualad. The sea prince wins, and Bart Horval goes home. Later, Aquaman reveals only to his fish friends the real reason for his detour: a Kryptonite meteor was lying within the seaweed. If he had gone through the seaweed bed, the Kryptonite would have been revealed to Horval, who could have sold it to enemies of Superman. Instead, Aquaman’s allies dump the meteor into a deep ocean trench.

Retrieved from "https://heykidscomics.fandom.com/wiki/Adventure_Comics_Vol_1_277?oldid=1524342"
Community content is available under CC-BY-SA unless otherwise noted.