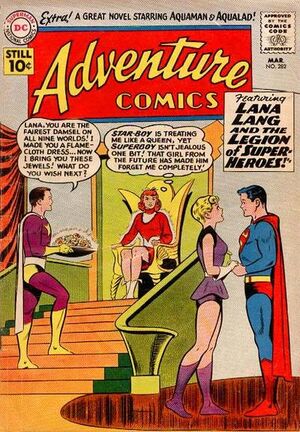 Appearing in "Lana Lang and the Legion of Super-Heroes!"Edit

Synopsis for "Lana Lang and the Legion of Super-Heroes!"Edit

Lana Lang is once more trying to win Superboy's affections, when the Boy of Steel is summoned to a cave near Smallville where he meets a super-hero calling himself Star Boy. Coming from the 30th Century and the planet Xanthu, Star Boy explains that he has similar super-powers to Superboy. He goes on to explain that he is also a member of the Legion of Super-Heroes, and that he has traveled into the past to stop two Xenthuian criminals who had escaped into this era and are hiding out on Earth. However, Starboy's X-ray vision cannot penetrate copper and so has asked Superboy's help who's x-ray vision will be able to see through the copper piping used in Smallville's water system to find the criminals, who have been hiding in underground caverns.

Lana Lang stumbles upon the two young heroes just as they finished capturing the Xanthuian criminals, and in order to get Superboy jealous, Lana bluffs Star Boy into believing she overheard his secret identity and forces him to pretend to be her boyfriend in order to make Superboy jealous. Traveling to the 30th Century with Superboy and Star Boy, Lana has the latter do whatever it takes to try and make Superboy jealous. However, Superboy sees through this ploy and ignores everything and even goes so far as to "date" a Xantharian girl, which causes Lana herself to become jealous and admit to the whole deception. With Lana having learned her lesson, the two teens from the 20th Century return to their own time.

Appearing in "One Hour To Doom!"Edit

Synopsis for "One Hour To Doom!"Edit

While breaking up some smugglers on a sail boat, one of the crooks manages to escape to a nearby island. Chasing after the crook, Aquaman and Aqualad come dangerously close to being out of contact with water for over an hour (their weakness) But quick thinking Aquaman finds some snow on a low mountain peak and the two use it's moisture to revitalize themselves.

After some side adventures, Aquaman and Aqualad are alerted of strange happenings on a volcanic island where they find crooks hiding out. The crooks manage to escape in their helicopter, and once again Aquaman and Aqualad find themselves out of water for close to an hour. But using the water contained in the milk of some mountain goats, the two replenish themselves.

Chasing the crooks to shore, the two go on land prepared with a flask filled with water, however it's ruined by gun fire. However the two manage to replenish themselves by finding water in the radiator of an abandoned car wreck.

When the crooks "surrender" and take Aquaman and Aqualad to their hide-out in the big city, the two find that they've walked into a trap and are tied up in separate rooms. Getting close to the hour deadline to be in contact with water, Aquaman uses a magnifying glass to set off room sprinkler system and as he busts out he finds that Aqualad had submersed his head in a nearby fish tank. The two heroes free themselves and make short work of the crooks and celebrate their victory with glasses of water.

Retrieved from "https://heykidscomics.fandom.com/wiki/Adventure_Comics_Vol_1_282?oldid=1516293"
Community content is available under CC-BY-SA unless otherwise noted.