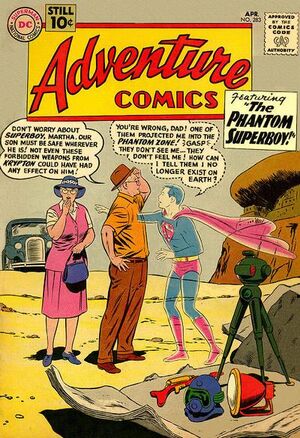 Appearing in "The Phantom Superboy"Edit

Synopsis for "The Phantom Superboy"Edit

A cache of Kryptonian weapons, including a Phantom Zone Projector, falls to Earth. Superboy learns of the Phantom Zone’s existence and how Kryptonian criminals were sent into it by a mental playback device in a helmet from the weapons cache. A lizard accidentally triggers the projector and sends Superboy into the Phantom Zone, but he manages to telekinetically write a message to Jonathan Kent on an electric typewriter. Jonathan finds the projector and releases Superboy from the Zone.

Appearing in "The Lion with the Double Identity"Edit

Synopsis for "The Lion with the Double Identity"Edit

Retrieved from "https://heykidscomics.fandom.com/wiki/Adventure_Comics_Vol_1_283?oldid=1398730"
Community content is available under CC-BY-SA unless otherwise noted.