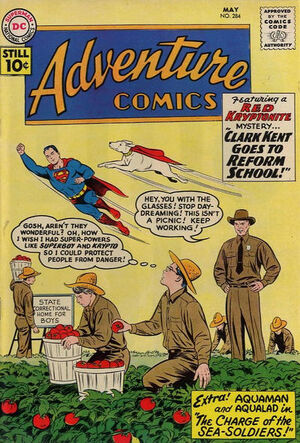 After getting a case of Red Kryptonite-induced amnesia, Clark Kent falls in with two joy-riding boys and ends up with them in reform school. He regains his memory and, before he is released, sees the meaner of the two boys begin his reformation.

Appearing in "The Charge of Aquaman's Sea Soldiers"Edit

Synopsis for "The Charge of Aquaman's Sea Soldiers"Edit

Evil genius Professor Snark is once more committing robberies at sea, however his first attempt at robbing a ship by having his thugs rob it in a ship disguised as an ice berg is foiled by Aquaman and Aqualad. When his next attempt where he uses a submarine disguised as a whale fails at the hand of Aquaman once more, Snark decides to come up with another method of defeating Aquaman. Days later Snark sets up a legitimate platform in the ocean and invites Aquaman over to see his latest invention: a device that will turn the oceans salt water into fresh water. Aquaman doesn't believe that Snark is doing this for the benefit of mankind. Soon he has to rush to the rescue of a boat being hijacked by pirates. However when Aquaman's undersea friends attempt to board the ship they fall mysteriously ill and they're forced to retreat while the pirates make off with the ship. Aquaman realizes it's because the water has been desalted, and since his undersea army need salt water to operate they couldn't stop the theft.

Approaching Snark with this, Snark refuses to do anything about it because technically he isn't breaking any laws.

Snark, satisfied that he's found a way to prevent Aquaman from stopping him, then plans a heist of a shipment of exotic animals, however when they attempt to rob them Aquaman and Aqualad arrive with an army of marine animals outfitted with respiration devices that feed them salt water. With these tanks they are able to defeat Snark and destroy his machine before turning Snark over to the authorities.

Retrieved from "https://heykidscomics.fandom.com/wiki/Adventure_Comics_Vol_1_284?oldid=1398731"
Community content is available under CC-BY-SA unless otherwise noted.