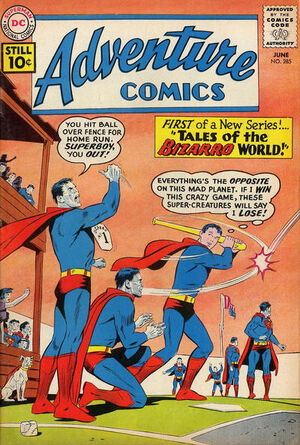 Me not ashamed of you no more, son! Keep up bad work and some day you will be worst student on whole planet!!! What a honor!!!

Appearing in "Gravity Girl of Smallville!"Edit

Synopsis for "Gravity Girl of Smallville!"Edit

When Prof. Lewis Lang brings back a strange belt left by aliens in Africa, Lana Lang tries it on, discovers she has anti-gravity powers and can fly and lift heavy weights with it, and, with her parents’ permission, creates the costume and secret identity of Gravity Girl. As Gravity Girl, she becomes a partner and competitor to Superboy, who eventually discovers her true identity. Later, when the belt is proven not to be proof against wood or stone, Dr. Lang suggests she have Superboy destroy it. He does, and Lana retires her Gravity Girl career.

Appearing in "The Shame of the Bizarro Family!"Edit

Synopsis for "The Shame of the Bizarro Family!"Edit

Bizarro-Jr. No. 1 gets in trouble at school for giving the correct answers on exam questions, but sleep-carves a Mount Rushmore-style monument to famous movie monsters of Earth, flunks his art test with highest honors, and redeems the pride of the first Bizarro family.

Retrieved from "https://heykidscomics.fandom.com/wiki/Adventure_Comics_Vol_1_285?oldid=1398732"
Community content is available under CC-BY-SA unless otherwise noted.