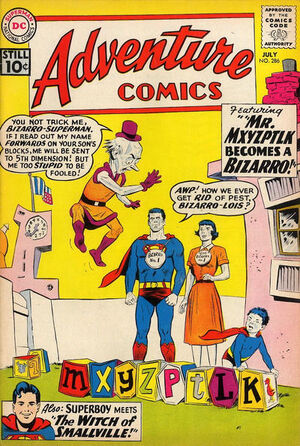 Appearing in "The Witch of Smallville"Edit

Synopsis for "The Witch of Smallville"Edit

In order to destroy a spy satellite from an enemy nation, but not put America in a position of offense toward that nation, Superboy engineers a ruse with Martha Kent pretending to be a witch who takes away Superboy’s powers temporarily and destroys the satellite.

When Bizarro No. 1 needs a job, he becomes a private detective, and discovers Bizarro-Klyptzyxm, an imperfect duplicate of Mr. Mxyzptlk, is committing the terrible crime of making perfect buildings on the Bizarro World.

Retrieved from "https://heykidscomics.fandom.com/wiki/Adventure_Comics_Vol_1_286?oldid=1399376"
Community content is available under CC-BY-SA unless otherwise noted.