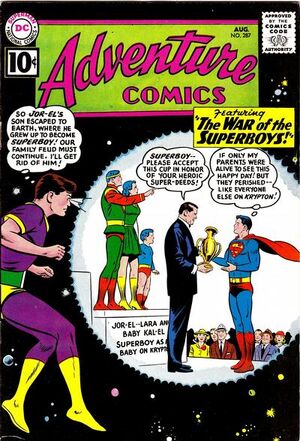 Appearing in "War of the Superboys!"Edit

Synopsis for "War of the Superboys!"Edit

On Krypton, before its destruction, juvenile delinquent Dev-Em plays many destructive pranks with his gang and gets in trouble repeatedly for bedevilling his next-door neighbor, Jor-El, and his family. But Dev heeds Jor-El’s prophecy of destruction for Krypton, outfits an alien shelter to take himself and his family to safety while placing them all in suspended animation, and allows them to survive while drifting in space. Years later, in Superboy’s time, the alien shelter lands on Earth, and Dev-Em is jolted out of suspended animation. He discovers Superboy’s existence and learns the Boy of Steel is really Kal-El, son of Jor-El. Dev lures Superboy into a trap, projects him into the Phantom Zone, and prepares to impersonate him on Earth.

After Bizarro No. 1 creates a Perry White to edit the Daily Htrae, Jimmy Olsen sneaks aboard the rocket to get a scoop, is dragooned into being a reporter on the Bizarro World, and misses great headline stories such as a dog biting a man. Things get worse when he is tapped to become the husband of a Bizarro Lois, but he creates a Bizarro Jimmy who takes his place, and Bizarro No. 1 returns Jimmy to Earth.

Retrieved from "https://heykidscomics.fandom.com/wiki/Adventure_Comics_Vol_1_287?oldid=1398733"
Community content is available under CC-BY-SA unless otherwise noted.