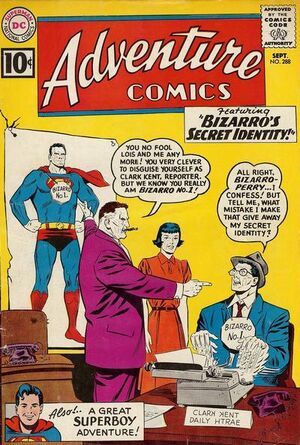 Appearing in "The Knave from Krypton"Edit

Synopsis for "The Knave from Krypton"Edit

Masquerading as Superboy, Dev-Em blackens his rival’s reputation with his parents and the people of Smallville. Then he releases Superboy from the Phantom Zone and takes himself and the space capsule bearing his parents into the future. Superboy finds that only the Kents believe his story of Dev-Em’s impersonation, and he is ordered by the mayor of Smallville to leave Earth. But Chief Parker believes Superboy, and concocts a ruse that implies Superboy was the victim of Red Kryptonite when “he” committed the acts of vandalism. The townspeople change their minds, and Superboy is allowed to stay.

Bizarro Mxyzptlk gives Bizarro Lois No. 1 super-powers, and she assumes the secret identity of Stupor-Woman to help female Bizarros. Mister Mxyzptlk comes by, makes everyone forget Bizarro-Lois was Stupor-Woman and takes away her powers, while making Bizarro No. 1 put on a fake nose and become Stupor-Man, using a secret identity of Bizarro-Clark Kent. Perry White exposes Bizarro-Clark as both Bizarro No. 1 and Stupor-Man because he wears his "Bizarro No. 1" medallion in plain sight. Bizarro abandons his disguise, but says he must be smarter than Superman, because his secret identity was exposed on his first case.

Retrieved from "https://heykidscomics.fandom.com/wiki/Adventure_Comics_Vol_1_288?oldid=1399417"
Community content is available under CC-BY-SA unless otherwise noted.