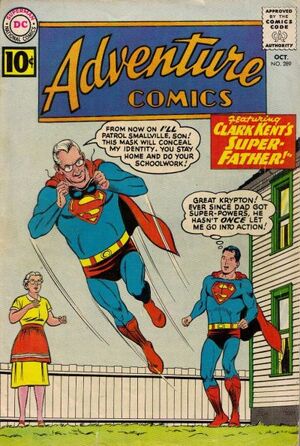 Jax-Ur, a Phantom Zone prisoner, escapes through a temporary warp in the Zone and comes to Earth, where he abducts and impersonates Jonathan Kent, pretends that he has gained super-powers from a space-jewel, and assumes the identity of Super-Father, making life difficult for Clark Kent and Superboy until the Boy of Steel exposes him, rescues his father, and returns Jax-Ur to the Zone.

When parents on the Bizarro World rise up in protest against horrifying TV programs from Earth like Daniel Boone, Bizarro No. 1 goes to Earth to find some wholesome heroes worthy of being seen on children's programming, like the Abominable Snowman, the Frankenstein Monster, and the Devil. He locates none of them, but does run across Titano, the giant super-ape, whom he calls "Tiny" and promises to make a star. On the Bizarro World, kids declare that "Tiny" is a steal of King Kong. Bizarro is disgraced. And because he is, the Bizarro Mayor proclaims him a hero and features him and his family in a ticker-tape parade.

Retrieved from "https://heykidscomics.fandom.com/wiki/Adventure_Comics_Vol_1_289?oldid=1399418"
Community content is available under CC-BY-SA unless otherwise noted.