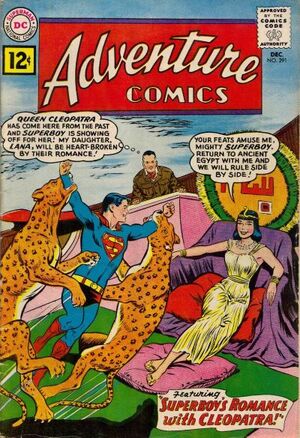 Appearing in "Superboy's Romance with Cleopatra"Edit

Synopsis for "Superboy's Romance with Cleopatra"Edit

When Superboy declares that his “ideal woman” is Cleopatra, Lana Lang pretends to be the Egyptian princess herself, yanked through time and space by an invention of her uncle, Professor Phineas Potter. But Superboy detects Lana’s imposture and takes her back to ancient Egypt for an adventure with the real Cleopatra.

Appearing in "The Bizarro Perfect Crimes"Edit

Synopsis for "The Bizarro Perfect Crimes"Edit

When criminal Bizarros kidnap Bizarro Lois Lane and hold her hostage, Bizarro No. 1 is forced to think up get-rich-quick schemes for them time and again, such as raiding Earth garbage dumps and wrecking cars to make them more valuable, until Superman impersonates him, lends a hand, and gets the wicked Bizarros to reveal where they have stashed Bizarro's wife.

Retrieved from "https://heykidscomics.fandom.com/wiki/Adventure_Comics_Vol_1_291?oldid=1399420"
Community content is available under CC-BY-SA unless otherwise noted.