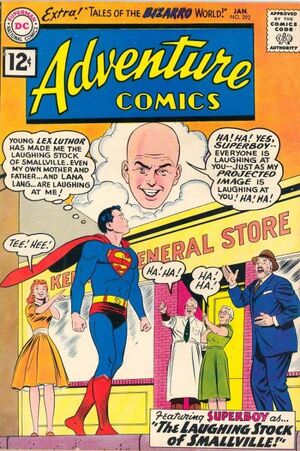 Appearing in "The Laughing Stock of Smallville"Edit

Synopsis for "The Laughing Stock of Smallville"Edit

Appearing in "Bizarro Creates a Monster"Edit

Synopsis for "Bizarro Creates a Monster"Edit

Bizarro is angered that broadcasts he picks up from Earth call the Frankenstein Monster a horror character, so he decides once again to give his people a real monster. First he captures an apelike caveman from another planet. Then he trains the duplicator ray on the caveman, and produces a blond Adonis whom foolish Earth people would call a matinee idol, but whose looks are enough to drive Bizarros into paroxysms of fright. The creature, whom Bizarro names Sapollo, does star in a film, but it proves to be too much for even the toughest Bizarros. Bizarro No. 1 eventually bows to the will of the planetary council, and agrees that Sapollo is too horrible to live. But before he can be captured, Bizarro Mxyzptlk merges Sapollo with the body of the caveman. Because the caveman is a decent-looking sort who goes around smashing houses, including that of Bizarro No. 1, everybody is satisfied, and all breathe a sigh of relief, knowing the monster has been banished.

Retrieved from "https://heykidscomics.fandom.com/wiki/Adventure_Comics_Vol_1_292?oldid=1399421"
Community content is available under CC-BY-SA unless otherwise noted.