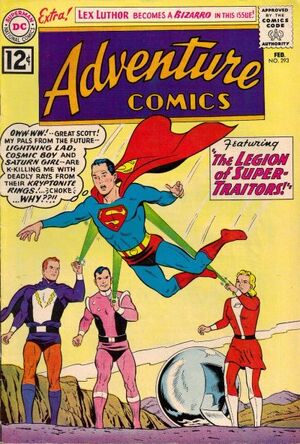 I'm always rescuing endangered aircraft. This time I'll be... Different! Instead of saving the plane, I'll wreck it! Ha, Ha, Ha! The propeller's shattering on my invulnerable hand!... Fall, Plane!!!

Appearing in "The Legion of Super-Traitors!"Edit

Synopsis for "The Legion of Super-Traitors!"Edit

After a day of work at Pa Kent's store, Clark is called into action as Superboy, however when attempting to save an air craft from crashing, Superboy suddenly leaves it to crash, forcing Krypto to come to the rescue. Afterward, Superboy suddenly snaps again and is about to throw Krypto into space along the path of a Kryptonite meteor, however he snaps out of it again.

Before Superboy can learn the source of his uncharacteristic behavior, he receives a call from the Legion of Super-Heroes. Going to the designated meeting place, Superboy meets with Cosmic Boy, Saturn Girl, and Lightning Lad who have come to Earth to get Superboy's aid updating their records of which Kryptonian criminals had been banished to the Phantom Zone before Krypton's destruction. As Superboy is showing the Legion, Mon-El suddenly appears and warns Superboy that the Legion plans on betraying him and freeing the Phantom Zone criminals. The Legion members then suddenly blast Superboy with special Kryptonite rings that incapacitate the boy of Steel. It's revealed that the Legion are under the control of the Brain Globes of Rambat, who seek to conquer the Earth, but saw Superboy as their only obstacle.

Appearing in "The Good Deeds of Bizarro-Luthor!"Edit

Synopsis for "The Good Deeds of Bizarro-Luthor!"Edit

When Bizarro No. 1 and his family are exiled from Htrae for making something perfect--the "S" symbol on the Bizarros' shirts--he creates a Bizarro-Luthor with the imperfect duplicating ray to help him regain his status. The Bizarro-Luthor is as noble as the real Luthor is evil, so he demands Bizarro do three good deeds before he will help. Grudgingly, Bizarro does the deeds, and Luthor gives him the idea he really needed: mass-produce Bizarro shirts with the "S" symbol backwards. With the terrible fashion misstatement now corrected, the Bizarros welcome their first family back to Htrae, and Luthor is honored with a pie in the face.

Retrieved from "https://heykidscomics.fandom.com/wiki/Adventure_Comics_Vol_1_293?oldid=1516236"
Community content is available under CC-BY-SA unless otherwise noted.