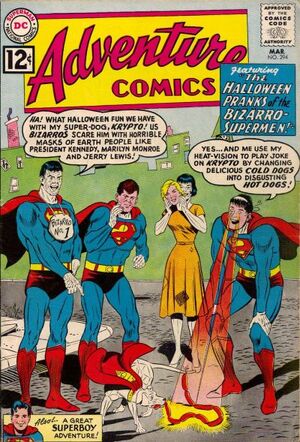 Appearing in "Dial M for Monster"Edit

Synopsis for "Dial M for Monster"Edit

The natives of the world of Xnor conduct a forced “student exchange program” with Earth, teleporting some Smallville teenagers to their world and sending some Xnor youth to learn about Terra. The catch is that, if Earthlings show unfriendliness to the Xnorians, the Xnorians will disintegrate their planet. Superboy helps the Smallvillians perpetrate a series of gags that convince the Xnorians to return to their home planet, while not suspecting any untoward behavior of their hosts. Superboy observes, with his super-vision, that the Xnorians next plan to visit Zrfff, home of Mister Mxyzptlk.

Appearing in "Halloween Pranks of the Bizarro-Supermen"Edit

Synopsis for "Halloween Pranks of the Bizarro-Supermen"Edit

On Halloween Bizarro No. 1 and his friends dress up in horrible masks of Marilyn Monroe, John F. Kennedy, and others, scare people, and play a prank on Bizarro Krypto, tying cold hot dogs to his tail and making him heat them up and eat them. Bizarro-Krypto flies away, trying out Bizarro Lana Lang, Bizarro-Kltpzyxm, and Bizarro Lex Luthor as new masters, and fighting the real Krypto along the way. He finally returns to Bizarro No. 1, who has created three new Kryptos, but kicks him, showing that his heart is really with the original Bizarro-Krypto.

Retrieved from "https://heykidscomics.fandom.com/wiki/Adventure_Comics_Vol_1_294?oldid=1399423"
Community content is available under CC-BY-SA unless otherwise noted.