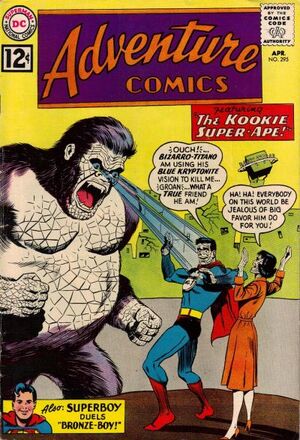 Appearing in "The Duel of the Superboys"Edit

Synopsis for "The Duel of the Superboys"Edit

When emissaries from the small nation of Vonrovia claim that their hero, Bronze-Boy, is greater than Superboy, Clark Kent and two other representatives from Smallville go there to investigate. Clark discovers that Bronze-Boy was Superboy himself, given amnesia temporarily by a Red Kryptonite exposure.

Appearing in "The Kookie Super-Ape"Edit

Synopsis for "The Kookie Super-Ape"Edit

Bizarro Lois No. 1 is the new women's wrestling champion of the Bizarro World, having lost to Bizarro Lana in a torrid bout. The problem is, unless she loses her title to someone else within 30 days, she'll be exiled to Earth. Bizarro, looking for a suitable opponent, trains his imperfect duplicator ray on Titano through a time-scope and creates a Bizarro Titano. Dubbed "Big Ape", Titano enters the ring against Bizarro-Lois, and wins by leaving the ring in a big hurry to go eat some coconuts he has spied from afar. Bizarro-Lois, knowing she can now revel in being a has-been, embraces her spouse.

Retrieved from "https://heykidscomics.fandom.com/wiki/Adventure_Comics_Vol_1_295?oldid=1399424"
Community content is available under CC-BY-SA unless otherwise noted.