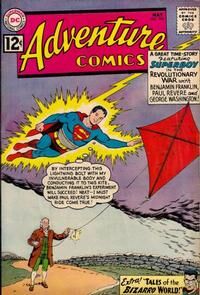 When Jonathan, Clark, and Martha Kent see their picture in an American newspaper from Revolutionary War days with a headline that they perished during a party, Superboy takes all three of them back in time to what turns out to be a parallel universe in which they have an adventure with Benjamin Franklin and other heroes of the Revolution, and are presumed wrongly to have died during a fire at the Boston Tea Party.

When Bizarro Perry White appears to be murdered by a gunshot and Bizarro Jimmy Olsen is held responsible, Bizarro No. 1 dons a deerstalker cap, watches a Perry Mason show from Earth for inspiration, and becomes Merry Payson, criminal unlawyer. Despite Bizarro No. 1's best efforts to prove Bizarro-Jimmy guilty, he is judged innocent, and sentenced by the judge to be executed. But, seconds before Bizarro-Olsen is to die, the judge pulls off a rubber mask and reveals that he is really Bizarro-Perry White, who faked his own murder to create a dull news story. Bizarro-Olsen and Bizarro-White go off as best pals. Bizarro No. 1 is heartbroken that he lost his first case, until Bizarro Lois reminds him that this failure is proof that he is perfectly qualified to be ruler of the Bizarro World. Bizarro No. 1 perks up immediately.

Retrieved from "https://heykidscomics.fandom.com/wiki/Adventure_Comics_Vol_1_296?oldid=1399425"
Community content is available under CC-BY-SA unless otherwise noted.