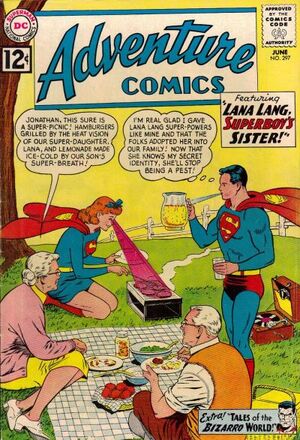 Lana Lang’s parents are believed killed in Africa, and Lana is adopted by the Kents. Due to a chain of circumstances, two crooks looking for Superboy’s identity are convinced he is a girl, and that the girl is Lana Lang. Lana capitalizes on it by wearing a Superboy uniform and forcing Superboy to get her out of trouble. Eventually, the crooks are caught, Lana gives up her masquerade, and the Langs are found safe and sound.

Appearing in "The Bizarro Who Goofed Up History"Edit

Synopsis for "The Bizarro Who Goofed Up History"Edit

Bizarro No. 1 has a dream in which he straightens out history by getting John Wilkes Booth to assassinate George Washington, making sure the Wrong Brothers fly the first airplane, giving Nathan Hale stretching powers so that he cannot be successfully hanged, having a fig fall on Isaac Newton's head so that he can invent Fig Newtons, and making sure the Earth is really square so that Christopher Columbus's ships can fall off it. When he wakes up, he learns that he has been talking in his sleep, Bizarro Junior No. 1 has transcribed his dream for an Earth history test, and has been responsible for his son getting a perfect score.

Retrieved from "https://heykidscomics.fandom.com/wiki/Adventure_Comics_Vol_1_297?oldid=1399426"
Community content is available under CC-BY-SA unless otherwise noted.