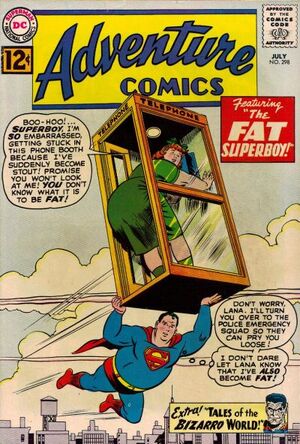 Your obsession with the idea that Clark Kent is Superboy is getting out of hand! You see Clark Kent everywhere!

Appearing in "The Fat Boy of Steel!"Edit

Synopsis for "The Fat Boy of Steel!"Edit

When milk irradiated by a cyclotron causes everyone in Smallville to get fat while the Kents are on vacation, Superboy realizes he’d better put on weight or risk revealing that he is really the still-slim Clark.

A jealous Bizarro forges Bizarro No. 1's medallion and commits a heinous act of fixing up a building in order to get Bizarro No. 1 admitted to a lunatic asylum. It works, but Bizarro No. 1 breaks out of stir, becomes a sheriff in a Tame East town, gets thrown in the asylum again, becomes a boy scout leader, gets thrown in the asylum again, breaks out, realizes he has left his medallion behind, comes back and asks politely for it. The doctors realize that only a sane Bizarro would come back to the asylum after escaping it, and pronounce him cured.

Retrieved from "https://heykidscomics.fandom.com/wiki/Adventure_Comics_Vol_1_298?oldid=1516273"
Community content is available under CC-BY-SA unless otherwise noted.