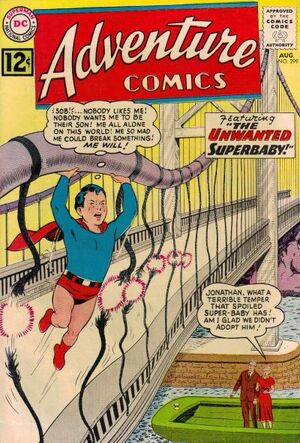 Innocence am no excuse!

-- Bizarro, doing his job as a policeman

Appearing in "The Unwanted Superbaby!"Edit

Synopsis for "The Unwanted Superbaby!"Edit

The Kents lose Superbaby when he jumps from the boat where they are traveling to Europe. Superbaby is adopted by various couples, but he is rejected every time due to his shocking behavior. Finally, the he hears the Kents and they can find him due to Superbaby's mighty shout.

For a vacation, Bizarro No. 1 and Bizarro-Junior No. 1 come to Earth, where they apply for jobs on the Metropolis police force. Superman is on a space mission, so Captain Bloke of the police sends the Bizarro pair on various missions, which they screw up every time. Then, when Bloke gets an accidental conk on the head, he offers a gold badge to Bizarro No. 1. Insulted by this, since anything less than a rusty tin can is unacceptable, Bizarro and his son turn on their heels and leave Earth.

Retrieved from "https://heykidscomics.fandom.com/wiki/Adventure_Comics_Vol_1_299?oldid=1399428"
Community content is available under CC-BY-SA unless otherwise noted.