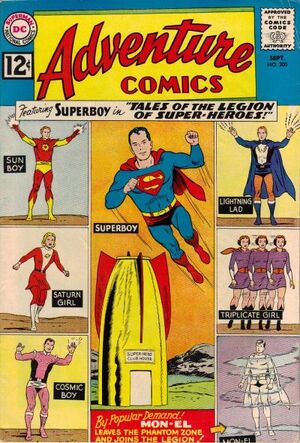 Appearing in "The Super-Planet of Clark Kent and Lana Lang!"Edit

Synopsis for "The Super-Planet of Clark Kent and Lana Lang!"Edit

Lana and Clark are accidentally transported to a strange world where Clark must make her think they both have superpowers in order to prevent her from guessing he's Superboy. (12 pages)

Appearing in "The Face Behind the Lead Mask!"Edit

Synopsis for "The Face Behind the Lead Mask!"Edit

When the powers of the Legionnaires go out of control, they summon Superboy to the 30th century to aid them. They discover the cause is a lead masked villain called Urthlo. When Urthlo drives back Superboy with Kryptonite vision, Superboy frees Mon-El from the Phantom Zone long enough for him to defeat Urthlo, who turns out to be a robot sent to the future by the teen-age Lex Luthor. But when the lead antidote (Serum XY-4) created for Mon-El proves to only be temporary, he is returned to the Phantom Zone to save his life. (12 pages)

Retrieved from "https://heykidscomics.fandom.com/wiki/Adventure_Comics_Vol_1_300?oldid=1504953"
Community content is available under CC-BY-SA unless otherwise noted.